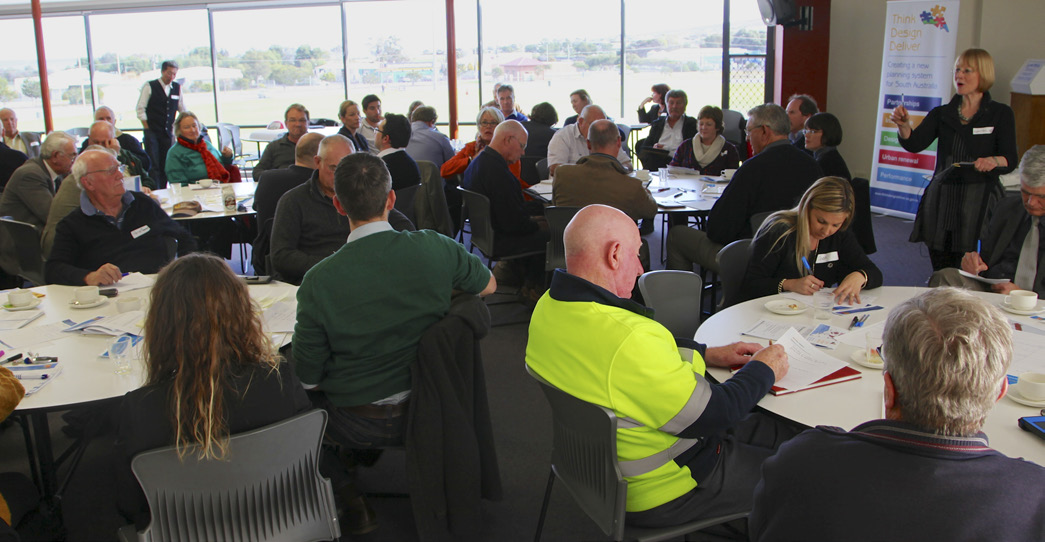 The first major review of South Australia’s Planning system for 20 years demonstrated the integral value placed on stakeholder and public participation in both its process and outcomes.

Initiated and resourced by the Planning Minister in 2013, the Planning Reform process called Think Design Deliver set out to engage as many everyday South Australians as possible through providing a wide variety of stakeholder consultations across the  State.

The ‘once in a generation’ review into the Development Act 1993 addressed how the planning system needed to serve a changing world where among other things, the community expected to have a system where they would be engaged early and genuinely.

The Act had been amended 629 times through 48 separate bills but was considered to be a barrier to development, investment and affordable living with involvement in planning issues in large part inaccessible to meaningful community input.

An Expert Panel was appointed with 5 independent members with planning expertise, assisted by a project team from the Department of Planning, Transport and Infrastructure.

Eighteen months later, in presenting their final 22 recommendations the Panel acknowledged that people had understood the opportunity to help create a planning system which will be contemporary, innovative and capitalises on technology and adapts to change.

The reforms to be debated in parliament in a number of stages have maintained the focus on community involvement with the recommendation for a new charter of community engagement.

The Expert Panel’s review process had two important streams of work – Engagement and Research. The research stream investigated best practice systems around the world – including engagement practices – and developed options for South Australia.

The Engagement stream was a comprehensive and wide-ranging program of opportunities for people to be involved.

The program included 127 events where people could participate as well as provided the opportunity for online feedback.

At the end of the review, more than 3,000 people had participated, 315 ideas and 245 submissions had been received. More than 90 meetings, briefings and workshop with stakeholders had been held including regional workshops with both community and councils.

A Planning Reform Reference Group including representatives from 22 community, professional and industry bodies and an agency reference group of representatives of state government agencies that regularly interacted with the planning system were established.

advertisements, stories and interviews and posters placed in council libraries.

Additionally, hundreds of personal letters from the panel chair were sent to community groups explaining the need for the review and encouraging people to become involved.

An active website outlining the whole program of the review and inviting input was updated regularly. The website carried photographs and written reports from all of the community workshops so that people could follow the activities, ideas and feedback. Once people had registered to the site they were advised of all updates.

The use of cartoons to depict the intention and process of the review panel was considered to have assisted the communication about the review process. These cartoons including the collaboration jigsaw illustration were used to promote the panel’s engagement process and on the Expert panel’s two reports.

The passion and energy and contribution from the community were acknowledged in the panel’s reports. The interim report said:

“The engagement process highlighted that people look to planning as a mechanism to enable social, environmental and economic objectives to be met. Importantly, many participants pointed out that the system and its component parts were not ends in themselves but vehicles for the achievement of these wider outcomes. Diverse issues such as resource management, social change, housing affordability, cultural development, public health and economic growth were all cited as having relevance to the planning system and its legislation.”

Staff of the Department of Planning, Transport and Infrastructure were facilitators in the community and council workshops. Assisting the independent facilitator and following a standardised questioning process, the DPTI staff recorded and collated community input. As well as providing valuable resources to an extensive engagement process, they were also able to experience first-hand the views of the community.

Undertaking such an extensive program across the State required considerable funds and staff. However, the extensive nature of the program was considered to be necessary and appropriate to achieve acceptable and long-lasting outcomes. In a future process, there would be a continued focus on trying to reduce the costs while keeping in mind the importance of obtaining community participation.

Download a PDF of the Creating a new planning system together case study (PDF, 343KB).