Augusta, Port Lincoln and the Maralinga Lands to identify young Aboriginal people interested in developing leadership skills. A variety of engagement processes are used to develop a small network of people across the state who participate in the program and then become advocates for physical activity in their communities.

In establishing the program, the vision was that it could be developed in partnership with Aboriginal communities and if they wanted, the program could transition to them over time, working toward a sustainable model with strong community ownership.

Whilst no formal evaluation has been done at this stage, the level of community buy-in has been increasing over the last 18 months and we are starting to see some ownership in relation to outcomes. Communities are becoming more willing to support the project, financially and with regard to time and effort.

In the lead-up to the event, much of the engagement was undertaken through both individual and contact networks, including face-to-face approaches to determine interest.

An initial group of eleven attended a Leadership Camp to introduce them to mountain bike riding with the aim of developing riding skills and techniques, an understanding of bike repair and maintenance and how to lead ride- groups safely. In addition, members of local Aboriginal communities and Aboriginal service providers were engaged to discuss aspects of leadership with the group.

The Australian Indigenous Leadership Centre provided a structured program to help individuals identify existing leadership skills and develop new ones, and apply these learnings during the camp.

Access to the broader community was through the initial group of participants, other ISP programs, community representatives in the Wilpena area, and sponsors who provided financial and in-kind support for the event.

The final event attracted 46 participants and a variety of sponsorship and other support. While feedback from participants, sponsors and supporters was

very positive, engagement with local Aboriginal communities as part of a plan to provide a cultural enrichment aspect of the event was not as effective as it could have been. In feedback, participants were clear that they would have liked to see and hear more about the local country and culture. 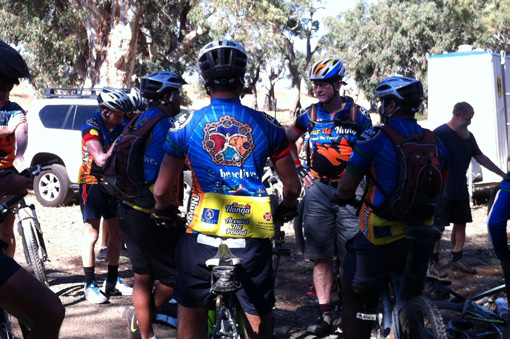 What would you do differently next time?

We are adding to the community engagement model as we go, broadening the base of potential partners so that we can try and hand over a plan that can be sustainable over time and flexible enough to be managed as separate components (ie single day rides in different regions) rather than staging major events. As we have done previously, we would involve community representatives in scoping as it gives them a better understanding of what we are trying to do. As we had never undertaken a project of this nature before - a major event overlaying a leadership journey, in a fairly remote regional location and trying to attract young people from all over the state to an activity they wouldn’t normally engage in - we learnt a lot on the run. We now have a much better understanding of the time and effort that needs to be put into building relationships, trust and getting buy-in before starting the journey.  There are lots of complications in a project like this, however, and there was a fair bit of chicken or egg as the local stakeholders had to see what the program could look like, and what the young people would get out of the program before the stakeholders could really commit to it.

Were there any unexpected outcomes?

After struggling initially to engage with stakeholders in the region where the event and Leadership Camp were conducted, involving them in scoping the following year’s event brought about significant buy-in and had them advocating for us in the community. This is likely to result in broader partnership/sponsorship opportunities and hopefully a  more sustainable future for the program.